Basically, there are eight types of graffiti.

Tagging is the easiest and simplest style of graffiti; it includes one colour and the artist’s name or identifier. It is considered disrespectful to write a tag over another’s artists’s tag or work.

A throw-up is like a more complicated tag. It usually has two or more colours, and bubble-style lettering. A throw-up can be done quickly and repeatedly, just like a tag.

A throw-up at Tuggeranong Parkway underpass in Chifley

A blockbuster is like a massive throw-up, usually in blocky letters. Blockbusters are used to cover a large area in a small amount of time. Blockbusters can be painted with rollers, which makes them faster and easier to do.

Wildstyle is an elaborate version of a throw-up and is particularly hard to read. Wildstyle often consists of arrows, curves, spikes and other things that non graffiti artists might not understand. 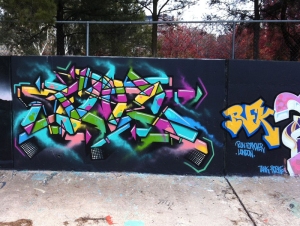 A heaven is a tag or artwork in a place that is extremely difficult to get to. An artist who manages to put one up gains a lot of respect from other artists.

A piece of heaven from Abyss .607 on the side of Braddon’s M3 Building on Lonsdale Street

A stencil is an easy (some say ‘lazy’) way to put up detailed pieces. By spraying over a stencil, you can produce a more detailed piece than by doing it free hand. And it’s also repeatable.

Stencil graffiti on Wakefield Gardens at the Ainslie shops

A poster is a quick and easy way to put up pieces. You just make the piece at home then paste it up where you want.

Paste-up by Abyss .607 on the Sydney Building

A sticker is like a downsized poster, and just as easy to execute. Many stickers are simply tags on postage labels, but sometimes they are more elaborate. 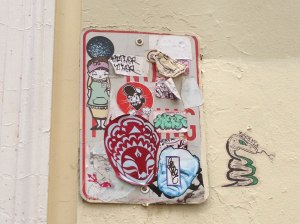 Stickers cover a sign on the Sydney Building, Canberra

A piece (short for masterpiece) is a picture that has been painted free hand. They contains at least three colours and take longer to paint. A piece in an obvious place will gain the artist respect from other artists because standing in an obvious place painting on walls where graffiti is illegal is a great risk.

A (master)piece by Abyss .607 at the ANU graffiti site